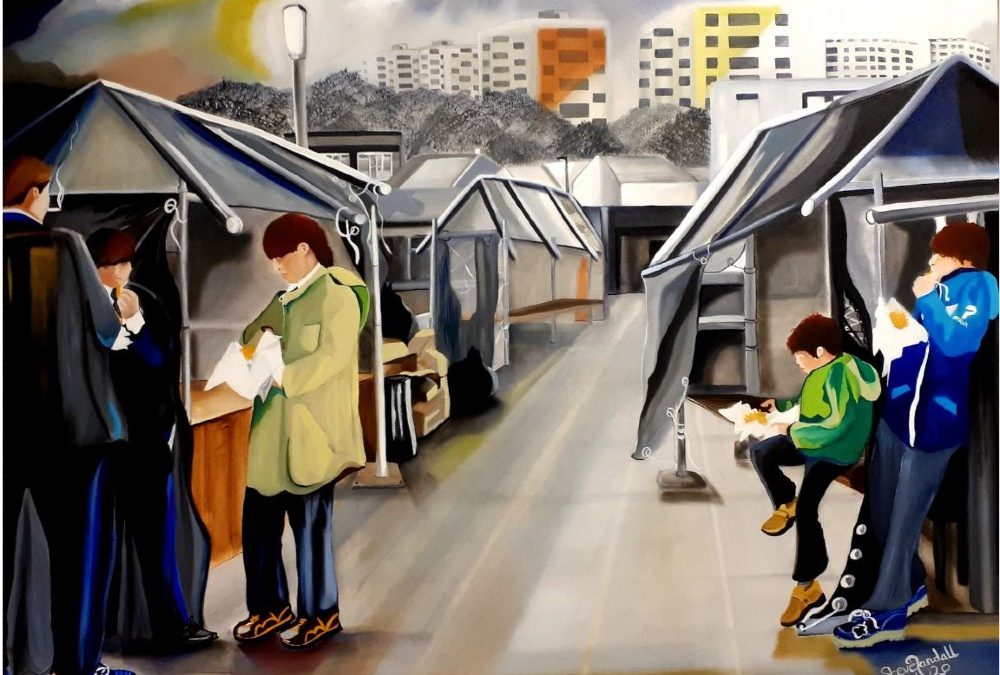 A new exhibition at Kirkby Gallery showcases the work of artist Steve Randall who grew up in Kirkby throughout the 1970’s and 80’s. Steve is self-taught and only discovered his passion for painting in 2014.  Although Steve moved away from Kirkby in 1985 the town left a lasting impression and has heavily influenced his work.

The exhibition, entitled ‘Kirkby Chronicles’ showcases a selection of oil paintings that celebrate Steve’s memories of growing up in in the town and tell a very personal story. To accompany the exhibition, the artist has written a book of the same name which provides context and detail about the stories that have influenced this particular selection of paintings.

Steve describes his paintings as:

“The external portrayal of happy times; bright representations of my childhood, played out in a town I loved and with people I understood. Yet it is painfully clear that I paint in a style that gives me solace.

“It’s impossible for me to ever run out of painting material; every memory leads onto another more random than the last and connects me deep to an overriding sense of belonging. This was the time I felt most safe. Those Kirkby streets were a protection against an outside world of which I knew nothing. If it’s strange to think of blocks of brick as beautiful then I’m very strange.

“I’m very proud of the Kirkby I grew up in and although I haven’t lived here since 1985 I will always consider Kirkby my home and still feel loyal to people I haven’t seen in over 30 years.”

Shortly after losing his mother in 2014, Steve’s wife Canan was diagnosed with a rare form of slow growing tumour that attacks the nervous system. Recognising that he needed something to focus on and believing in his talent, Canan decided that Steve should quit his job and dedicate himself to his painting.

“I greeted the suggestion with howls of laughter…but she was right! It certainly took my mind away from our immediate challenges and gave us a chance to contribute to charities as I sold a couple of paintings for the brain tumour charity, donated other paintings to various charity auctions and immediately we felt we were at least ‘doing something’. Often the scenes I paint have meaning way beyond the pigments left on the canvas.”

It’s absolutely wonderful to see these nostalgic artworks exhibited here in the very town that inspired them. Steve’s memories of the Kirkby in the 70’s and 80’s will be shared by so many and will no doubt spark conversations about people’s experiences of growing up here.”