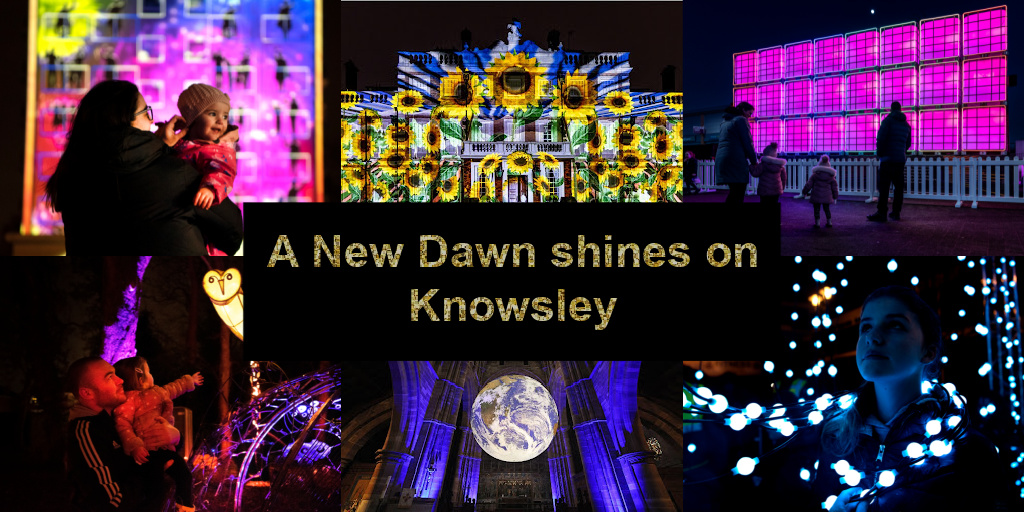 Knowsley’s New Dawn programme – which opened its year as the Liverpool City Region Borough of Culture – has been a huge success with visitors. More than 20,000 people have attended the events across the Borough with many thousands more experiencing the lighting installations located in Kirkby and Huyton town centres.

With 6 key events and the illumination of town centres, landmarks and public buildings, the programme has placed Knowsley firmly in the spotlight at the start of this important year. The New Dawn programme has also provided a clear indication as to quality and standard to expect from Knowsley’s other events taking place during 2022.

Crucially the feedback from those lucky enough to experience New Dawn for themselves has surpassed expectations with visitors describing events as being “stunning, spectacular and amazing.”

“It has been such an amazing start to our year. I have been overwhelmed – not just by the events and special moments we have created – but by the response from our communities. Every event has been packed out and the feedback from people has been better than we could ever have imagined.

“It has been really good to hear people talk about the quality of the events, their joy at experiencing them so close to home and of course seeing people make such wonderful memories too. Just seeing the thousands of images shared and positive comments made on social media is quite remarkable.

“I just want to thank everyone for their support to date and I can’t wait for people to see what else we have in store for the year ahead.”

Knowsley’s New Dawn programme kicked off in Kirkby on 14 January with the switch on of Aqualux – a huge 8m by 3m light installation consisting of 48 containers holding up to 1,000 litres of water. Accompanied by a lively soundtrack, the artwork was welcomed by Spark Drummers and hundreds of residents who turned out in force for the switch on. And due to its popularity, its stay in Kirkby was extended meaning even more people could see this impressive artwork.

Next in the calendar was The Magic Wood – a Fire Garden by Walk the Plank. With free tickets being snapped up in just one weekend this was a popular attraction with more than 2,400 people attending. It was particularly well received by residents of Halewood, who made up 90% of visitors.

Back in Kirkby, anticipation was building to the arrival of Luke Jerram’s Gaia that came to St. Chads Church on 28 January. Over three weeks nearly 18,000 people came to see this 6 metre wide replica of the earth. Alongside individuals and families, hundreds of school pupils also viewed the artwork, which has been seen by people all over the world. A broad and diverse events’ programme also gave residents and community groups the chance to come together to enjoy a range of things from music and poetry to storytelling and karate. Probably most notable in the calendar was a mass wedding vow renewal on Valentine’s Day when almost 50 couples, previously married in the church, renewed their vows and captured the imagination and hearts of the north west when broadcast on both the BBC and Granada local news.

It was the community of Stockbridge Village who were the stars of the show next as Tall Tales projected the stories of local people and places onto a 16-storey residential tower. The bespoke projection by artists Illuminos also featured a soundtrack with included the voices and memories of the local community.

Huyton Village Centre was the next place to experience the wonder of New Dawn with the arrival and switch on of Submergence and Singularity – two immersive art installations by world renowned artists Squid Soup. Illuminated each day after dark, the artworks took pride of place amongst shoppers and people out enjoying local bars and restaurants – adding something extra special to the village centre experience.

Finally, the programme came to its climax at Knowsley Hall with the New Dawn Light Spectacular transforming the Hall and its grounds in an enchanting wonderland where a vision of a pop-up story book told the tale of Knowsley and its people. Despite the challenging weather conditions, which led to the unavoidable cancellation of one of the events, almost 1000 golden ticket winners braved the wind and cold temperatures to enjoy this magical and unique experience.

“New Dawn has been better than we could ever have imagined, and we hope that it really has given the communities of Knowsley and the wider region some special and unforgettable moments. If you missed out on New Dawn then don’t worry, there’s lots more coming up in the year that you are sure to love.”

Knowsley’s year as the Liverpool City Region Borough of Culture is set to celebrate all aspects of culture in Knowsley. Everything from art to theatre to music, comedy, sport and much more. The programme is being added to all the time but promises to provide something for everyone to enjoy – no matter what your age or interests.

Other plans for the year include a mass participation sporting relay across the borough, a music festival, Owl & Pussy-Cat sculpture trail and National Gallery Masterpiece tour to name just a few. The summer will also see the much-anticipated opening of The Shakespeare North Playhouse in Prescot – whose opening programme is soon to be announced.