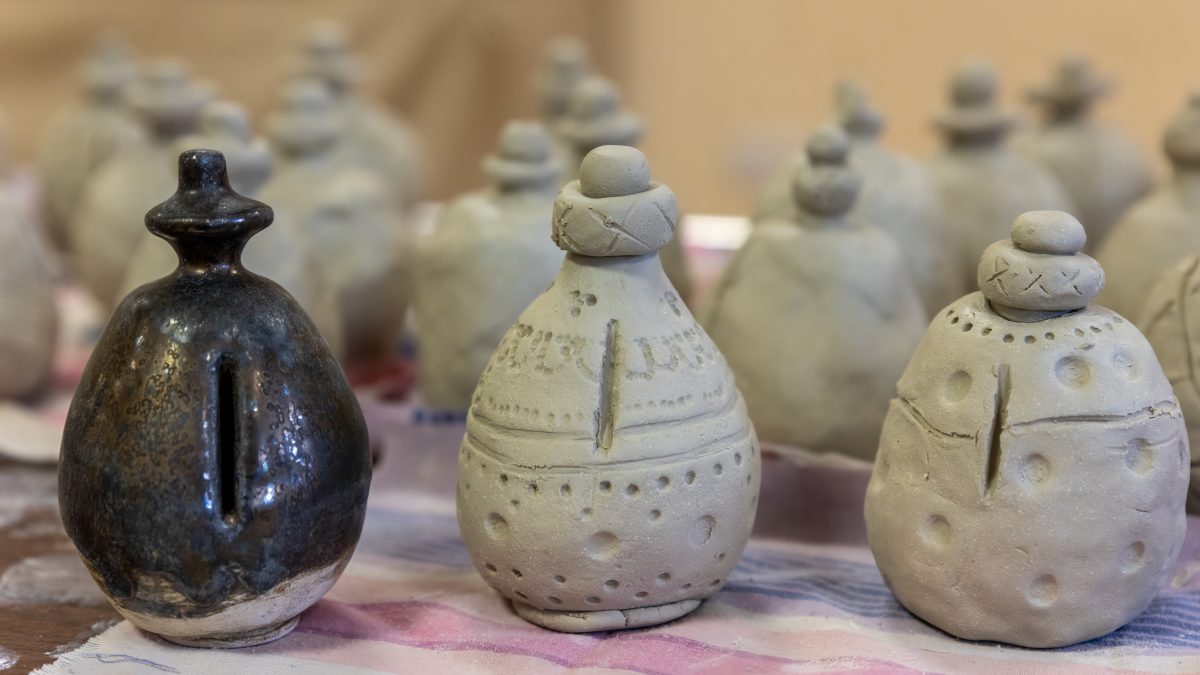 360 ceramic moneyboxes have been created by the Knowsley community for a one-of-a kind installation at Shakespeare North Playhouse later this year.

In a series of workshops set up by Prescot’s Community Curators and delivered by ceramic artist Louise Waller and Vicky Griffiths from Knowsley’s Culture Team, members of the public were shown how to hand-craft an Elizabethan-style moneybox using clay.

The ceramic workshops were made possible with support from The National Lottery Heritage Fund. Thanks to National Lottery players, the project received funding to create a trail of heritage-inspired artworks to help tell the town’s story and celebrate the importance of Prescot’s Playhouse.

Workshops were held for local schools, groups and even Kier staff and members of the Shakespeare North team to be part of the artwork, creating a special legacy. The finished moneyboxes will form a striking mass-participation artwork which will welcome visitors as they enter the foyer of Shakespeare North Playhouse, which is due to open its doors this summer.

A spokesperson for Knowsley Council said: “In our year as Liverpool City Region Borough of Culture we are celebrating the history and heritage of every corner of Knowsley. Honouring Prescot’s significant pottery-making heritage with this unique project is a wonderful way to bring that history alive for younger generations as well as visitors to the area. We cannot wait to see the finished moneyboxes on display later this year.”

Evonne Bixter, Head of Engagement for Shakespeare North Playhouse said: “We are delighted to have this fantastic collaborative artwork on permanent display at Shakespeare North and look forward to sharing it with visitors and explaining the historic links to Prescot”.

Money boxes like these were used to collect admission fees when people went to watch plays. They could be hung around the waist on a cord, held in place by the knobble on the top, and the coins posted safely inside. When they were full, they would be smashed open to reveal the contents. The term “box office” comes from the place where they were stored.

Pottery was a very important trade in Prescot from Elizabethan times right through until the 1800s. Made from clay dug straight out of the ground it was sold at the markets and fayres that led to the town’s growth, and even exported around the globe. The money boxes will be glazed with a dark metallic sheen to look like Prescot pottery and add an extra local twist to the artwork.

As well as making a money box, participants were asked to write their own secret message or wish for the future, which will be put into their pot when it is ready for display.

The stunning new venue, home to the only 17th-century style timber theatre outside London and anticipated to attract 140,000 visitors a year, will open its doors to the public with a joyful weekend of free festivities, from July 15-17.

Shakespeare North Playhouse has been built entirely during the pandemic thanks to public funds and donations, including £12.2m from Knowsley Council, £10.5m from the Liverpool City Region Combined Authority, £5m from the Treasury via Arts Council England, and £3m from the Government’s Covid-19 Cultural Recovery Fund.

Another £1m+ has come from private and philanthropic donations including the Ken Dodd Charitable Foundation which generously supported the funding of the Sir Ken Dodd Performance Garden, the Garfield Weston Foundation and The Foyle Foundation. A further £8m is being provided by the Liverpool City Region Combined Authority in order to improve the local transport infrastructure.

The venue will also host a programme of regular family and community activities and events during the opening season. This will include: pre-school music, storytelling and spoken word sessions, monthly open mic nights for beginners and experienced