Love makes the world go around 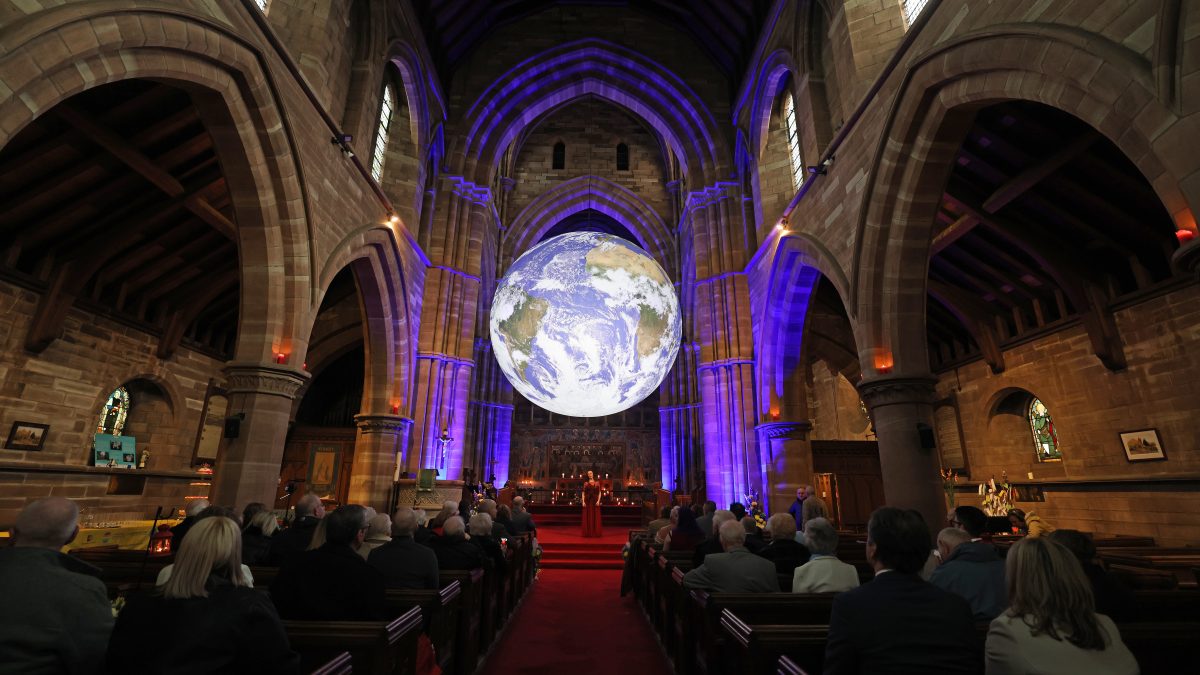 Almost 50 couples said ‘I do’ as part of a special ceremony on the most romantic day of the year.

The mass wedding vow renewal took place on Valentine’s Day in St. Chad’s Church in Kirkby. It was made even more special as the service was conducted in the presence of Gaia – the 6-metre 3D sculpture of the earth, currently on display in the church as part of Knowsley’s year as Liverpool City Region Borough of Culture.

All of the couples who renewed their vows were previously married in the church and took part in this moving event to celebrate their love and lives together. From 2 years of marriage to 65 years, it was a real celebration of their special relationships.

Gordon and Debbie who have been married for 37 years were one of the couples who renewed their vows. Their love story started on 14th February 1983 when Gordon’s friends at Kirkby Post Office sent a secret Valentine’s Card to Debbie because they knew Gordon liked her but was too shy to say anything. That afternoon she reciprocated and sent a Valentine’s card back to him and they set up a date for later that week. The following year they were married.

Diane and Roy will be celebrating 57 years of marriage this year. Diane was 15 when she met Roy, age 19. Diane sang in the choir at St Martin’s and Roy sang in the St. Chad’s boys Choir. They met while singing round the Christmas in Kirkby. Diane says they say each other and ‘knew’.

When remembering her wedding day, Denise says: “”The sun shone, and our family and friends joined us on our special day. We were married by the Reverend Canon John Lawton on Saturday 14th August, 1965 at 2.30pm. St Chads choir were there which made it very special.”

Vicar Philippa Lea who conducted the ceremony said: “This was a very special service for me to deliver, to have so many couples here in St. Chad’s to renew their vows at the same time was a once in a lifetime experience. We’re incredibly proud of the role St. Chad’s has played in the lives of many generations and it was wonderful to have so many couples take the opportunity to reaffirm their love and their vows they made to each other on their wedding day.”

Liverpool City Region Mayor Steve Rotheram and his wife, who were married at St Chad’s in 1989, took part in the renewal service. Steve commented: “This was a truly unique event, and the perfect way to celebrate Valentine’s Day. Lots of people have already been in touch to tell me how excited they have been by Knowsley’s year as Liverpool City Region Borough of Culture so far. I know there is still much, much more to come!”

Cllr Shelley Powell, Knowsley’s Cabinet Member for Neighbourhoods and Communities said: “This was such an extraordinary and moving occasion. “This really is what culture is all about – bringing people together to celebrate the things in life that matter to us and bring meaning.

Take a look at more photos from the mass renewal ceremony on Flickr.

During the ceremony, couples were treated to performances from Flat Pack Opera, a glass of fizz and a specially created wedding cake.

A new online exhibition “A history of love and marriage at St. Chad’s Church” has also been launched to share the stories of many couples married in St. Chad’s over the years. This exhibition has been created with funding from the National Heritage Lottery Fund.