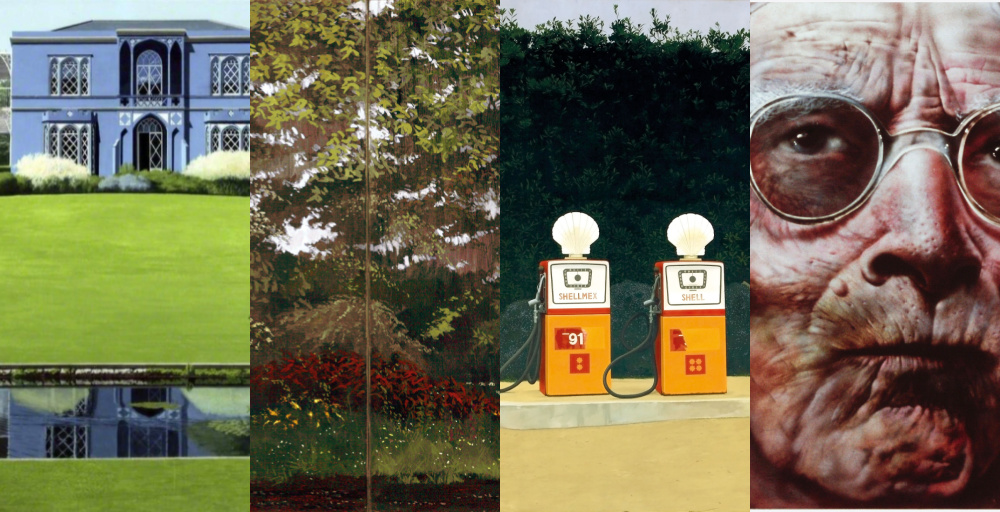 From Tuesday 10 May – Saturday 16 July 2022, Kirkby Gallery celebrates the work of four major artists who lived and worked in Liverpool from the 1960s and whose legacy lives on today.

These four influential figures of the Merseyside art scene are John Baum (b. 1942), Maurice Cockrill (1936 -2013), Adrian Henri (1932 -2000), and Sam Walsh (1934 – 1989). The Likeness of Things: Baum – Cockrill – Henri – Walsh celebrates the work and friendship of the group, who helped to put Merseyside on the cultural map and continue to inspire artists today. It is the first exhibition of its kind to tell the story of these four artists and their practice during the 1970s.

Highlights include Baum’s Five Girls on the Steps of the Art College (1973), Cockrill’s large scale, 3 x 3 metre Scillonian Pumps (1974), Henri’s prizewinning Painting I (1972) and Walsh’s Portrait of Ivon Hitchens (1974) as well as a selection of works that haven’t been on public display for more than 40 years.

The exhibition presents work from artists’ estates and private collections but, significantly, will also display work from regional public art galleries and collections including the Walker Art Gallery in Liverpool, the Williamson Art Gallery & Museum on the Wirral, The Atkinson in Southport, Liverpool John Moores University and Liverpool University’s Victoria Gallery & Museum.

A spokesperson from Knowsley Council said:

“Merseyside’s contribution to arts and culture can never be underestimated and it’s fantastic that we have this unique exhibition coming to Knowsley during our year as Liverpool City Region Borough of Culture. It’s an ambitious display that celebrates a significant moment in our region’s history and I’m sure people from far and wide will make the trip to Kirkby Gallery to immerse themselves in this fascinating and beautiful show.”

All four artists started teaching at Liverpool Art College in the 1960s, though they had come to the city from different places — Baum had studied at the Slade School of Art in London, Cockrill at Reading, Henri at Durham University and Walsh at Dublin College of Art.

They were friends, and part of the same art scene. As early as 1962, Henri sang his poems with Walsh on guitar in the basement of the Everyman Theatre (then Hope Hall), and they wrote an art manifesto for their joint exhibition at the Portal Gallery in London. In the late 1960s, Cockrill performed poetry alongside Adrian Henri and Brian Patten, and a few years later, Baum painted Cockrill’s portrait in An Afternoon at Windermere House, the house where poet Roger McGough lived.

Although each artist had developed different approaches and styles in the 1960s, through the 1970s, Baum, Cockrill, Henri and Walsh were often exhibited together under the banner of “realism” in the UK and abroad. During that decade, they concentrated on what John Baum called “the likeness of things”, depicting people, objects and places in a clear crisp manner sometimes described as photo-realist, in reference to the movement then evolving in the US.

This exhibition revisits that work of the 1970s when, with apparent emotional detachment, Baum, Cockrill, Henri and Walsh reappropriated traditional genres like portrait, landscape or still-life painting, and gave them a resolutely contemporary twist.

John Baum (b. 1942) Baum is a painter and teacher, born in Wales. He studied at the Slade School of Fine Art, London, 1960–4. In 1965 he became a lecturer in foundation studies at the faculty of art and design at Liverpool Polytechnic. During his career, Baum has taken part in a number of group shows, including the John Moores Exhibition in Liverpool, Ibis Gallery, WAC and Royal National Eisteddfod, in Wales. In 2002, Bruton Street Gallery, London gave Baum his first major London showing for nearly 20 years. John Baum left Liverpool in 1989 and became Head of Art at Bangor’s Coleg Menai. He retired in 1994 to paint full time. He lives and works in Anglesey.

Maurice Cockrill (1936 -2013) Maurice Cockrill studied at Wrexham School of Art and the University of Reading between 1960 and 1964. He lectured full time in the Faculty of Art at Liverpool Polytechnic from 1967 to 1980. His first solo exhibition was held in 1984 at the Edward Totah Gallery, London. He rapidly established an international reputation, with subsequent solo exhibitions in Europe and America. Cockrill was a Prize Winner in the John Moores Liverpool Exhibition in 1974 and a retrospective of his work (1974 to 1994) was held at the Walker Art Gallery, Liverpool in 1995. He went on to become the Head of the Royal Academy Schools in London.

Adrian Henri (1932-2000) Henri was born in Birkenhead and trained as a painter at King’s College, Newcastle, and taught at Liverpool Art College in the 1960s. Henri came to prominence as a writer alongside Roger McGough and Brian Patten in the ground-breaking anthology The Mersey Sound, 1967, one of the best-selling poetry books of all time. He went on to publish numerous poetry collections for adults and children. He was also a playwright, novelist and librettist.

Sam Walsh (1934 – 1989) Born in County Wexford, Ireland, Walsh was a painter, draughtsman and teacher. He attended Dublin College of Art, 1952–5 and then moved to London. During his time in London he showed at the Institute of Contemporary Arts (ICA) and New Gallery. In 1960 he moved to Liverpool, where in 1961 he began to exhibit at Liverpool Academy, being elected a full member in 1966. Walsh did a teacher training course at C F Mott College, 1962–5, while becoming increasingly identified with Pop Artists. He showed widely in the north of England and in 1963 his portrait of Francis Bacon appeared at the John Moores Exhibition, Liverpool and which was later acquired by the gallery.  In 1968 began teaching full-time at Liverpool College of Art, retiring in 1986. His portrait of Paul McCartney, ironically titled Mike’s Brother (1964) is exhibited at the National Portrait Gallery in London.